For the past few weeks, more eyes were on the federal government than usual as the debt ceiling crisis intensified.  Many of those eyes were angry.  That anger was largely misplaced.

It’s no secret that most Americans nowadays dislike politicians, though the dislike deepened over the last few weeks as our elected officials in Washington struggled over whether and under what conditions to raise the debt ceiling.  A friend of mine publicly pledged on Facebook to never give another cent to anyone currently in Congress, and urged those who agree to repost her message. One less scrupulous journalist, Jeff Jarvis, made a bigger name for himself Tweeting angrily with the hashtag “f—-youwashington,”
and drawing thousands of supporters in the process.  This was just the tip of the mountain of anger that erupted online and off among Americans. 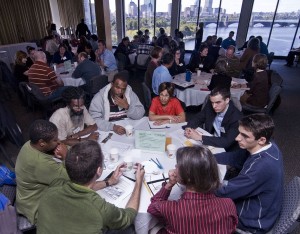 In most federal budget years, raising the debt ceiling has not precipitated a political crisis, even if every year some in Congress vote against raising it.  Of course, the federal deficit is growing too large and has to be addressed sooner or later.  But the debt ceiling crisis was foremost a political crisis, not an economic one.  The single greatest cause of that political crisis was the 2010 election of 63 Republicans to the U.S. House of Representatives – including many Tea Party-backed candidates hell bent on cutting the federal budget now, in a down economy – giving Republicans a sizeable majority in the House, and dividing Congress.  This should turn public scrutiny back on American citizens, not Washington politicians.

It is easy to blame voters for their ignorance or idiocy.  Indeed, one striking pattern I find in listening to Americans talk about their fellow citizens is that so many are convinced that most Americans are gullible idiots.  These critics, abundant on the left, right and center, usually see themselves and those who agree with them as immune from the rampant plague of idiocy.  There is indeed plenty of evidence that most Americans – no doubt including many of those convinced that they are smart and most everyone else is an idiot – have a quite limited grasp of political facts.

Some political scientists believe that this general ignorance is natural and functional.  In complex modern societies, the argument goes, people have specialized jobs and limited attention, yet politics is complicated, so politics should be mostly left to professionals, just as we depend on professionals in most realms of life.  The trouble is, even professionals make mistakes and you can’t always trust them to serve the public interest, so citizens still need to be sufficiently engaged to cast informed votes and keep political professionals honest.

Meanwhile though, the evidence shows that politicians and activists are becoming more strident and less open to compromise while ever growing numbers of Americans are eschewing political parties in favor of “independence.”  The combination is toxic.  Many Americans believe that strong partisan voters are more ignorant and gullible, but as political scholars know, the evidence shows the opposite: the growing numbers of independents and tepid partisans tend to be less informed and more susceptible to manipulation than strong partisans.  So we face a public increasingly “independent” – that is, politically disillusioned and disconnected, not so much informed or attentive, except in facile fits of fury – and accordingly, increasingly susceptible to the often hysterical propaganda of partisan politicians and activists who foresee “catastrophe” if they don’t get their way.

There are saner ways of doing politics, but attention-seeking commercial media don’t cover them as much precisely because they don’t shout or shoot.  Not all politicians and activists are zealots.  Indeed, there is a burgeoning movement for “deliberative democracy” led by wiser activists, politicians and scholars that advances a very different kind of politics, one in which citizens listen, read, communicate and compromise.  Most people are capable of such citizenship, but it doesn’t develop merely through exhortation.  Any citizenship lives through institutions such as parties, elections, newspapers, and dialogues.  For better or worse, the laws and norms of our institutions define the kinds of citizens we become and the politicians we elect.  Will we develop more deliberative institutions, or stay on our path to more crises, anger and disillusionment?