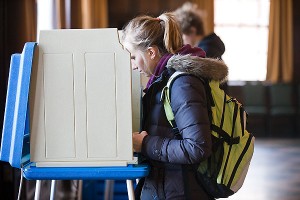 Back in fall 2010, I taught “Community Organizing for Social Change” for the second time at Stetson University in DeLand, Florida.  I engaged my course students in a formal experiment in which they attempted to raise Stetson student voter turnout in the 2010 mid-term election by repeatedly contacting randomly selected students face-to-face to encourage them to vote.  The article, linked below, reveals the results of that experiment and the reasons why I and my co-author, Stetson political scientist, David Hill, who kindly crunched the numbers for this experiment,  conducted the study.

Given the growing proportion of young people going to college, how important young voters can be to election outcomes when they vote (witness the 2012 U.S. presidential contest between Obama and Romney, in which Obama’s aggressive mobilization of student voters proved critical to his re-election), the challenges and opportunities youth and being in college pose to student voting, increasing use of formal experiments comparing treatment and control groups to test what works to get people out to vote, we thought it time to try a voter turnout experiment with college students.

You can read the abstract (i.e., summary) and the full article here.