The developing research on “priming” is fascinating and important for anyone who wants to improve human behavior and the world.

“Priming” refers to prompts or primes intended to influence people’s thinking and/or actions, and since the 1990s, social scientists have uncovered many ways that people respond to primes. In an earlier and now classic priming study, psychologists found that people primed with words associated with the elderly (e.g., retirement), walked more slowly upon leaving the experiment than those who had not been so primed (Bargh, Chen & Burrows 1996). In a different study, students primed with professor stereotypes answered more questions correctly on a knowledge test than those primed with supermodel stereotypes (Dijksterhuis et al. 1998). Another experiment found that visitors of an online auto market who had been primed on money with a green site background featuring pennies looked at pricing information longer than those who had been primed about safety (Mandel & Johnson 2002). In a more recent and troubling case, children and adults exposed to food advertising ate more, and in the kids’ case significantly (45%) more (Harris, Bargh & Brownell 2009). 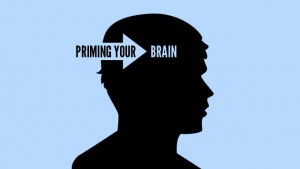 For better or worse then, priming influences people. This generally holds true even for those who claim to be immune to priming because they are more informed or self-aware. The point though is not to deplore priming or people’s manipulability. Humans tend to be sensitive to contextual cues, consciously or not, and have always sought to influence each other, subtly or not. The fact that humans are responsive to priming is not an inherently good or bad thing. Much depends on whether priming is done to encourage good or bad behavior.

And the good news is that priming has been shown to encourage good thinking and behavior. In one experiment, subjects who heard music that urged helping others (e.g., the Beatles’ Help, USA for Africa’s We are the World, Michael Jackson’s Heal the World) were more willing to donate money to a nonprofit than those who had not heard such music (Greitemeyer 2009). In another study, restaurant customers who received the short quote “a good turn never goes amiss” printed at the bottom of their bill on average left larger tips than those who got the neutral quote “He who writes reads twice,” or no quote at all (Jacob & Gueguen 2012). And most recently, an experiment showed that consumers who ate an apple before shopping bought 25% more produce than those who did not eat an apple, and 28% more than those who ate a cookie (Tal & Wansink 2015).

This research suggests that there is promise in efforts to prime acts of kindness, civic engagement, voting, learning, saving, exercise, healthier eating, and a host of other good behaviors. There are questions about how long priming effects last, especially in the real world where people are exposed to so many and sometimes conflicting primes, rather than the carefully controlled experimental labs where most priming studies thus far have been done. The experience of real-world marketers focused on priming consumerism may hold at least some of the answer: it takes repeated, widespread and varied priming to yield the greatest impact on thinking or behavior. That, in turn, takes time and money, which most organizations have in quite short supply.

Still, for organizations interested in promoting particular good behaviors, the research on priming recommends developing and testing effective ways to prime people in everyday life. The evidence from marketing, in turn, recommends that organizations interested in nurturing the same good behaviors collaborate to enhance their capacity to carry out sustained, widespread and varied priming campaigns.

For the many business, nonprofit, academic and government organizations directly or indirectly interested in cultivating a wider culture of learning, a good first step may be to come together regularly to talk about what they are doing, and could be doing together to prime learning not just in schools, but in everyday life beyond schools. Monthly city, state, national or even international tele- or video-dialogues, for instance, may go a long way toward nurturing – and modeling – learning and collaboration in the service of better behavior, better communities, and better societies.

Jacob, Celine and Nicolas Gueguen. 2012. “Exposition to Altruism Quotes and Helping Behavior: A Field Experiment on Tipping in a Restaurant.” Annals of Tourism Research 39:3:1694-1698.

Bargh, John A. 2006. “What Have We Been Priming All These Years? On the Development, Mechanisms and Ecology of Nonconscious Social Behavior.” European Journal of Social Psychology 36:2:147-168.