I delivered the following speech to the Democratic Party of Volusia County, Florida, located in the nationally significant “I-4 Corridor” (see related post titled “Central Florida: Political Epicenter of the World”), in 2011.  The speech discusses how Democrats approach and should approach others.  The following could, arguably, be applied to many liberals and leftists.

Dr. Wayne Bailey kindly asked me to speak with you for a few minutes about the importance and challenges of civic engagement, and how we might increase turnout for Democratic candidates.

Rather than bore you with abstract platitudes about the importance of democracy and citizenship, I thought I’d offer some challenges for us all.  I should warn you though that what I am about to say goes against what many of us, as Democrats, think and do.

Two days ago, I attended the monthly meeting of my local, the Democratic Club of Northwest Volusia.  At the meeting, I heard two ideas I’ve often heard Democrats speak, two ideas I would like to challenge.

The first was that the reason why Democrats lose elections is because they are too centrist or even conservative, not passionately Democratic enough.

The second idea was that we need to “educate” voters that what they think (if it’s conservative) is wrong.

Now lest you think I’m about to appeal for a Blue Dog Democratic politics…I am not.  To the idea that we lose because we’re too moderate, I think this notion is wrong.  First of all, most candidates probably lose for a variety of reasons, not one reason alone.

In other words, candidates win or lose less because of their beliefs per se, than whether their beliefs cohere with their constituency’s beliefs.

This is not a popular message with strong Democrats, or any partisan for that matter, because partisans like us want to believe that if we just speak our convictions frequently and passionately enough, we will win.  But the reality is that it depends on whether voters in any given district are open to our beliefs.

This brings me to the second idea voiced at my club’s meeting on Thursday: that we need to “educate” voters that the conservative beliefs they have are wrong.

One of the things I love about Democrats is that many of us want to know the facts, and uphold the importance of science and hard evidence.  But we sometimes forget that people – not only Republicans and independents, but Democrats too – are social creatures as much if not more than reasoning creatures.  To be sure, some people are more emotional, others more cerebral…and some just prefer to keep their head in the sand.  But most people don’t take too well to being “educated.”  If we think we’re more informed or worse still, more intelligent, than the voter we’re trying to convince – and this becomes apparent through our words, tone of voice, or facial expressions – then we probably won’t win over that voter.

We aren’t going to win over voters by “educating” them, let alone berating them for having opinions we disagree with.  Just because they disagree with us, doesn’t mean they’re ignorant or stupid. 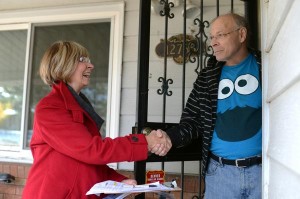 If we want to win over voters – even some Republicans – my sense, judging from experience as a political sociologist and a political activist, is that we win voters over by (1) listening to them, (2) empathizing with their experiences if not their beliefs, and (3) gently highlighting the things they say that cohere with our own beliefs and experiences.

On Thursday night, before our local’s meeting, I made some calls to Democrats on our membership list to help build our club and prepare us for the 2012 elections.  I spent 24 minutes on the phone (probably too long) with one woman, but her story bears repeating here.  This woman, whom I’ll call Jane, told me she used to be a Democrat but she was tired of both parties, and is now leaning independent.  I asked her to tell me why she was leaning independent nowadays.  You know what Jane told me?  She went to hear some candidates speak last year, and one candidate, who didn’t identify their party affiliation, impressed her.  So Jane emailed some of her friends to share that she was impressed with this candidate.  And guess what?  Two of her friends, both Democrats, “attacked” her (“attack” was Jane’s own word) for being impressed with this candidate, who turned out to be a Republican, and sent the attack to all the friends Jane emailed.  Jane was clearly shocked and hurt, and this social interaction – not Democratic ideas – was what turned her off to the Democratic Party.

That’s a shame.  That’s a loss for us because Jane, a retiree, had not only previously donated money and supplies to our Democratic club, she had repeatedly volunteered. Fortunately, by listening to Jane, empathizing with her hurt, and pointing out that many of the issues she told me she cared about – including global warming, and getting light rail in Central Florida – are Democratic issues, I was able to get Jane to agree to renew her dues to our Democratic club.  She also asked me if I’m married, and when I told her I’m single, she told me she’d “be on the lookout” for me.

So, I’d like to conclude with some ideas for how we might win more elections.  The first two ideas are about political ethics, that is, our personal conduct as Democrats:

1)    Preach less, and listen more.  Most people like good listeners, and dislike preaching, or condescending “education.”  We need to empathize more than criticize.

2)    We need passion, but not intolerance.  We need to stop thinking that people who disagree with us on some things are stupid or ignorant because that only drives voters to the Republicans, who generally do at least one thing right – they don’t condescend.  We will invariably encounter voters who don’t agree with everything we think.  (Lord knows, Democrats don’t agree on everything, and we should be ok with that!)  The challenge is to find common ground, and build a shared passion for common issues.

Beyond these two political ethics, there are some brass tacks:

1)    First and foremost, as the sociologist Herbert Gans once said, bring democracy to people, don’t expect people to come to democracy.  Too often, we hold meetings and rallies and expect people to come.  Usually, the only people who come are the already converted.   Instead, I’d like to suggest less talk, more action, shorter meetings and more calls to voters, more door knocking, and active tabling at fairs and markets – going where people go, rather than expecting them to come to us, as Herbert Gans wisely urges.

2)    To do this, we need to get out of our comfort zones.  As social scientists have learned, people love to be with their own kind.  As the saying goes, “birds of a feather flock together.”  Opposites do not attract.  Practically, this explains why we prefer to attend a long club meeting or political lecture than make calls, table, or knock on the doors of strangers.  It’s safer, easier, more comfortable.  Yet in a diverse democratic society like ours, the only way we can win elections is by connecting with diverse strangers, including people who don’t agree with us on all issues, or even dress, look and talk like us.  That’s not easy, but it’s absolutely necessary if we want to win.

So I’ll end with two challenging questions.  Ask yourself:

1)    How much time exactly do you spend per month going to Democratic club meetings and political lectures, and compare that to how much time you spend making calls, door knocking, or otherwise connecting with voters to systematically build our party?

I’m not innocent.  These questions are challenging for me too.  So as our governor likes to say, “Let’s get to work.”