This letter contributing to the debate following the December 14, 2012 massacre in Newtown, CT was published online or in print in three city newspapers in Alexandria, VA:

“Guns don’t kill, people do,” says the National Rifle Association.  It sounds so right because it’s so obvious.  But while it’s obvious that people kill, guns make it too easy to kill. 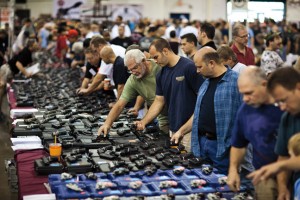 Imagine that on December 14, 2012, Adam Lanza had approached the Sandy Hook Elementary School with knife or a baseball bat, rather than a gun.  The likelihood is that he would not have been able to break through the school doors – which were routinely locked in the morning, as they were when Lanza arrived on that day – let alone murdered twenty-six people, including twenty children.

In the ensuing public debate, there have been calls for gun control and greater attention to mental illness.  The trouble with the latter approach is that shooters, like Adam Lanza, often don’t have a record of mental illness, let alone a criminal record.  Indeed, after many individual and mass shootings, people who knew the killers often report to journalists their surprise that the killer could do such a thing.  So how can we prevent killings when many shooters don’t show any signs of mental illness, or a criminal record?

What Adam Lanza did have is access to guns – guns that his mother collected and trained her sons to shoot.  And so is true of many rational, law-abiding, gun-owning parents in America, convinced that with proper training and security measures, they or their children won’t commit the unthinkable, in silent premeditation, a moment of rage, by mistake, or else.

Whatever modest gun control measures state and federal legislators manage to pass, despite stiff NRA opposition, will not stop gun violence in the United States.  Still, there is much that can be done to reduce gun violence, including universal background checks on firearms purchasers, reporting of lost or stolen firearms, full or limited bans on the carrying of firearms into public buildings, and measures to prevent guns getting into the hands of those with diagnosed mental illness.

I’m happy to learn that House Delegate Patrick Hope and my own State Senator Adam Ebbin have recently introduced legislation to advance measures like these.  I urge my fellow Virginians to call their respective Delegate and Senator to support them.  To find your Delegate and Senator, visit http://virginiageneralassembly.gov/.