The following op-ed was published in the Orlando Sentinel on Tuesday, September 14, 2010, and was picked up two days later by the Chicago Tribune.  In December 2010, the U.S. Census Bureau announced how U.S. House seats would be redistributed in accord with state population changes from the 2000 to the 2010 Census.  In the 2012 election, Florida will elect two new U.S. House Representatives, bringing its total Electoral College (EC) vote to 29, while the next largest battleground state, Ohio, will elect two fewer Representatives, bringing its total EC vote to 18.  This news further increases central Florida’s political significance.

A nation’s capital is typically its political center, that is, the place where national political leaders meet to make decisions, where advocacy groups and lobbyists converge to influence government decisions, where the news media routinely point their cameras and questions when they cover national politics, and where people who consume political news naturally look when they think of politics.  For these reasons, Washington D.C. is indeed the political center of the United States. 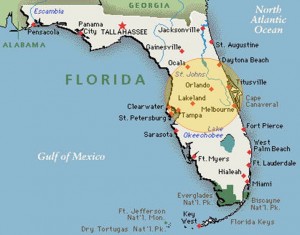 But the political center is not always the political epicenter.  In earthquakes, the epicenter is the earthquake’s origin, the point from which the shocks reverberate outward and are felt miles and miles away.  In politics, as in other domains, there are earthquake epicenters, places where things happen that ripple outward, affecting life far beyond.  A nation’s capital is often, but not always, its epicenter because political earthquakes can happen in many places.  This is perhaps truest in democracies, where political power is more diffused.  And in democracies, it is probably truest during elections, when the eyes of political leaders, activists, and attentive citizens are turned at least for a moment away from the political center, and on the evolving series of earthquakes happening wherever highly consequential elections are occurring.

Among democratic elections throughout the world, there is no earthquake more powerful than the American presidential election.  Ever since the end of World War II, when the United States emerged relatively intact to become arguably the strongest nation in the world, economically, culturally and politically, more eyes turn to American presidential elections than to any other elections in the world.  This is all the more so after 9/11, when the U.S. government became all the more involved globally in order to fight terrorism and secure its interests.

As the scholars Peter Schuck and James Q. Wilson put it colorfully in their recent book, Understanding America, “for better or worse, America is the 800-pound gorilla in every room in the world.  When it has an itch, the world scratches.  When it gets a cold, the world sneezes.”  Nowhere is this truer than in Central Florida.